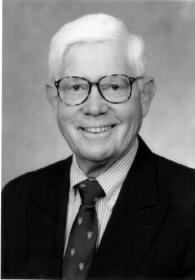 Mr. Anderson has frequently represented FairVote on major media outlets and has been a frequent lecturer and expert commentator on issues of electoral reform, United Nations reform, foreign affairs, American politics, and independent candidacies. He has published widely on the role of Congress in both domestic and international affairs.

Between 1961 and 1981, Mr. Anderson served ten terms in the U.S. House of Representatives from the 16th District of Illinois. He served on the House Rules Committee and for a decade was Chairman of the House Republican Conference.

For more than a decade Mr. Anderson teaches constitutional law at Nova Southeastern University. He taught political science and law as a visiting professor at numerous universities, including Bryn Mawr College, Brandeis University, Stanford University, Oregon State University, the University of Illinois and the Washington School of Law.

Mr. Anderson earned his B.A. and J.D. from the University of Illinois, Urbana-Champaign, received an LL.M. degree from Harvard Law School in 1949, and has since been awarded honorary doctorates of law from Wheaton College and Trinity College. During World War II, Mr. Anderson was a staff sergeant in the U.S. Field Artillery. In foreign service between 1952 and 1955, he was Economic Reporting Officer in the Eastern Affairs Division. He served as States Attorney in Winnebago County, Illinois for four years.

Read more on John Anderson in the Harvard Law Bulletin