Would Frank Underwood still have been in office in 2013? No, probably not. 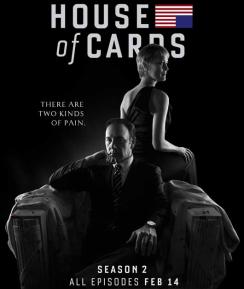 I, like most other staffers at FairVote, am a big fan of the Netflix serial drama House of Cards. The show is hard not to like: it provides hardy doses of politics, intrigue, romance, and most importantly, vengeance. For those interested in politics who have somehow managed to avoid the phenomenon, House of Cards follows Congressman Frank Underwood’s epic quest for revenge against a president who promised to appoint him Secretary of State and then went back on his word. I dare not mention any of the show’s numerous shocking twists in this blog, for fear of spoiling any episodes for those who did not binge-watch the entire second season the moment it came out on Valentine’s Day. But as students of congressional elections, there is one question that we at FairVote can’t help but raise: how on earth is Frank Underwood, a white Southern Democrat, still in office in 2013?

In the Deep South – South Carolina, Georgia, Alabama, Mississippi, and Georgia – white Democrats in the House have become even scarcer. Today, only one white Democrat, John Barrow (GA-12), is still in office, and he could easily be unseated by a Republican in 2014. Additionally, the only white Democratic U.S. senator from those states, Mary Landrieu (LA), could be unseated in 2014.

From an electoral perspective, Frank Underwood is modeled after Rep. John Spratt, who represented a district incorporating Underwood’s hometown of Gaffney, South Carolina for 28 years.  Spratt, a Democrat, lost his district by a ten point margin in 2010, one of the many Democratic incumbent casualties of that election. If that district had been represented by Underwood, whose political prowess seems unparalleled by any of the other politicians around him – “hunt or be hunted”, as he says – perhaps it could have been an unlikely Democratic hold out.

But political skill in Washington matters little against the overpowering influence of partisanship in determining congressional election outcomes. Only one of South Carolina’s districts voted for Barack Obama in 2008 – its lone majority-minority district, which Underwood could not plausibly represent as a white man. In the 2010 election, Republicans won 153 of the 163 seats with a Democratic partisanship of 44% (the partisanship of Spratt’s district) or less. If Underwood did survive the 2010 Republican wave, he was an outlier.

Of course, the partisan realities in House of Cards are somewhat different than the ones we are experiencing today. President Walker, a Democrat, was inaugurated in 2012, which would imply that his predecessor was a Republican. Without a Democrat in office, the 2010 midterm elections might not have been the reactionary Republican wave we experienced, a wave with the power to unseat Frank Underwood. And without that wave, it is plausible that there could be a few more white Southern Democrats serving in the House of Cards Congress than in our current Congress.

There is a way to ensure that white Southern Democrats are adequately represented in the House in real life instead of just on television: fair representation voting. With fair representation voting, Democratic candidates would be able to achieve representation in the South in proportion to their share of the vote, including in South Carolina. Democrats could win by means other than majority-minority districts, which tend to elect non-white Democrats but leave significant numbers of both white and black Democrats unrepresented outside of their lines.  Southern voters would be able to elect a diverse array of representatives without having to worry about gerrymandering, an inherently corrupt process. And incidentally, Northern Republicans would be represented in proportion to their share of the vote as well, which is certainly not the case now.

One common joke in Washington is that the main difference between House of Cards and reality is that Frank Underwood’s Congress actually gets things done. While having the morally dubious Underwood himself in Congress might not be desirable, bringing back bipartisan representation of the South would go a long way toward breaking down congressional gridlock.