The 2012 Elections and the Vanishing Congressional Moderate 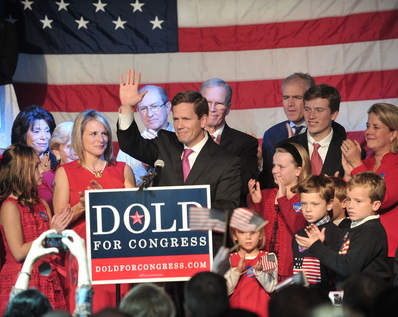 Robert Dold, one of the few Republicans who represented a strongly Democratic district in the 112th Congress, concedes his race for re-election on November 6. (Sun Times)

Many observers of the American political process have bemoaned our increasingly partisan Congress, with representatives from both parties clinging to the party line and refusing to compromise with the other side. If you were hoping that the 2012 elections would help fix this problem, here's some bad news: things are only getting worse. The congressional moderate is on the verge of extinction.

As FairVote showed this summer in its analysis of crossover voting and district partisanship, there has been a steady decline in the number of moderates from both parties in recent decades.

But the number of moderates in the 113th Congress will fall to unprecedentedly low levels. In our crossover voting report, we identified 20 "moderates" in the 112th Congress--defined as those congress members ranked as the 181st to 200th most liberal members (selected because there were 190 Democrats in Congress at the time) in the National Journal's 2011 Vote Ratings. There was a readily apparent explanation for why those members tended to vote so moderately--most of them represented districts that had balanced partisanships (defined as districts that voted for Obama at roughly the level of his national average in 2008) or partisanships tilted against their own party.

Of those 20 moderate congress members, only eight of them will be returning to serve in the 113th Congress. Some of the other 12 retired, some lost in primaries, one--Joe Donnelly--successfully ran for the U.S. Senate, and several lost their re-election bids last Tuesday. Here are the eight remaining moderates from that list:

Of those eight, three--Barrow, McIntyre, and Matheson--likely only survived because 2012 was a strong year for Democrats overall (and Barrow faced a particularly weak challenger). If 2014 proves to be a more neutral or Republican-favoring election cycle, all three will be very vulnerable.

There will, of course, be new members taking the place of those departing 12 in the ideological center of Congress. But will those members be as independent-minded and willing to cross the aisle as their predecessors?

Why does district partisanship matter so much in determining who is going to vote moderately and promote bipartisan policymaking? Simply put: electoral incentives. Congress members representing districts of opposing partisanship have strong incentives to work with the other party, because failing to do so would risk alienating the cross-party supporters that are necessary for their re-election. Members representing districts in which they can get elected entirely by voters identifying with their same party have no such incentive.

Even worse, the inability of congress members to win in the opposing party's districts is a self-perpetuating cycle. As the number of moderates in Congress decreases and parties vote in lockstep, voters will increasingly identify more with parties than with individual candidates, and be less likely to elect new moderates. The inevitable result is a gridlocked Congress operating on two partisan poles rather than in a solution-oriented center, and fewer and fewer competitive congressional races in which the voters can make a real difference.

The best way out of this vicious circle is major structural reform to the congressional electoral process. FairVote offers a solution in its Fair Voting 2012 report, in which existing districts would be combined into three or five seat "super-districts" using fair voting methods to elect their representatives. Each super-district would likely elect at least one moderate candidate to Congress every election cycle--potentially increasing the number of moderates from 10 to 110. Many Americans would like to elect more moderates to Congress, but our winner-take-all system no longer allows them to do so.

Congressional moderates are dying off, and fast. Major electoral reform is the only way to bring them back.