Reforms were presented, rebutted, and debated with live polling of the audience (including those watching online) following each exchange.To view National Democracy Slam 2015 in its entirety, visit the Washington College of Law's webcast page, and read associated papers for every proposal at NationalDemocracySlam.com.

The day culminated in a final “Democracy Slam” moderated by NBC’s Chuck Todd, in which an impressive panel of judges rated six reforms and their impact on congressional elections based on a set of five criteria. Each reform was given a score of 1 (low) to 5 (high) for its impact on each of the following criteria: 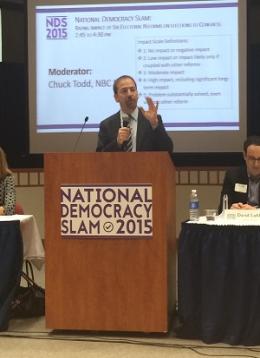 a) Voter turnout and political participation

b) Fair representation of parties and political groups;

The panel of nine judges for this session included a mix of journalists, scholars, and reformers:

Michael Li of the Brennan Center for Justice presented on independent redistricting, Adam Lioz of Demos on small-dollar public financing, John Fortier of the Bipartisan Policy Center on having a National Primary Day for congressional elections, Harry Kresky of Open Primaries on Top-Two primaries, Rob Richie of FairVote on Top-Four primaries with ranked choice voting (RCV), and Drew Spencer of FairVote on multi-winner districts with RCV.

Each presenter pitched the judges and fellow presenters on how their reform would impact each of the criteria, and after each pitch the judges weighed in. Chuck Todd interacted with the panel, challenging them to explain their scores, or tease out major discrepancies among the scores.

Michael Li’s independent redistricting proposal was up first. When evaluated on its impact to increase electoral competition, it scored a 3.4 among judges, indicating that judges thought its impact would be more than “moderate.” That was the only criteria in which Li’s proposal registered above a rating of 3, however. Adam Lioz’s proposal for small-dollar public financing of campaigns sparked compelling debate, but did not reach an average rating of 3 on any of the criteria. Like the independent redistricting proposal, Lioz’s proposal scored best on increasing electoral competition, where it scored an average rating of 2.8..

The next three presenters tackled different approaches to reform America’s primary system. John Fortier’s proposal to have a National Primary Day was a favorite of moderator Chuck Todd, who remarked on how media coverage of primaries might be transformed if they were all held on the same day. The judges scored the proposal well on its ability to increase voter turnout, giving it an average rating of 3.1 for the criteria. The judges also discussed the proposal as being among the most feasible of the reforms.

Harry Kresky and Rob Richie then gave back to back presentations on structural reforms to traditional primaries. Kresky advocated for a Top Two primary system, as is used in California and Washington, while Richie explained why a Top Four primary with ranked choice voting was a better option for voters and candidates.

Judges were generally supportive of both reforms as an alternative to traditional primaries, however clearly favored the impact that a Top Four primary with RCV would have. Richie’s proposal was rated to have close to a "major" impact on its ability to increase electoral competition and reduce polarization in congress, with average ratings of 3.6 and 3.7 respectively on those two criteria from the judges. The panel was particularly fond of the proposal’s ability to disincentivize negative campaigning, which contributed to earning a 3.7 rating for reducing polarization. 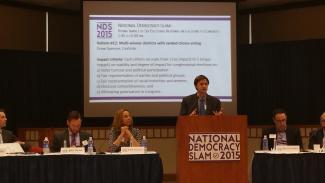 Finally, Drew Spencer presented on FairVote’s core concept of electing Congress from multi-winner districts with RCV. The proposal sparked interesting debate from the panel of judges and Todd, and generated the highest marks from judges for the entire session. It scored above an average of 3 on all criteria except voter turnout, and achieved a 4.2 from judges (indicating a ‘major’ impact) on its ability to increase electoral competition.

Todd then turned to the audience to weigh in on the overall positive impact of each reform on congressional elections. A total of 45 audience members participated in a live poll, rating each reform on a scale of 1 (low) to 5 (high).

The audience agreed with the panel of judges, and also found Spencer’s proposal of multi-member districts with RCV to be the most impactful reform overall, with Richie's proposal of a Top Four primary with RCV a close second. Voters also agreed that Li’s proposal of independent redistricting would have a moderate impact as well.

John Fortier, presenting on a National Primary Day, substituted two of the criteria which were removed from the chart above for the sake of comparing the reforms. Since the session produced vigorous debate, we are checking in with judges to see if they have changed their votes after the deliberation that took place. Look for a follow-up post reflecting those thoughts and considerations from the panel of judges.

The earlier portions of Democracy Slam 2015 also featured lively debate and discussion about other important reforms, with audience polling opportunities. The first session, “Judging Seven Democracy Innovations” included seven reforms which were all voted on by the in-person and online audience. Approximately 78 voters weighed in on the following reform questions:

Should the Securities and Exchange Commission require corporations to provide information on all political donations?

Should shareholders have the right to vote on corporations’ political spending?

Reform #3: Do you support the Change the Rule proposal on presidential debates to guarantee access to a third candidate?

Reform #4: Should the representation of women be considered in decisions regarding Section 2 voting rights remedies?

Reform #5: To what degree would the Schmitt-Richie reform proposals affect the impact of money in politics?

Reform #6: Would “fair representation voting systems” be a better solution to gerrymandering than any system with single-winner districts?

In the second session, Jamie Raskin and John Koza debated Trent England and Sean Parnell on the merits of the National Popular Vote Interstate Compact, which would guarantee the presidency to the presidential candidate that won the popular vote. Audience members voted before the debate, and then after.

After lunch, Congressmen Mark Pocan and John Sarbanes gave keynote speeches. Rep. Pocan spoke about his efforts to establish a right to vote in the U.S. Constitution through a constitutional amendment. Rep. Sarbanes presented his legislation, the "Government By the People Act," to establish small-dollar public financing. The audience voted on the merits of the proposals.

Reform #9: Should an explicit, individual right to vote be added to the U.S. Constitution?

Reform #10: Should Congress pass the “Government By the People Act”?

A Polarized America? A conversation about the nature of political participation

In this session, Jamie Raskin and former congressman Mickey Edwards commented on the impact of several reforms on political polarization in America. The audience then had their chance to rate the reforms.

Reform #11: Independent redistricting, by Aaron Scherb of Common Cause

To view National Democracy Slam 2015 in its entirety, visit the Washington College of Law's webcast page. The conference sparked excellent discussion and provided an opportunity for all to share their bold ideas for our democracy. Look for more coverage of the conference soon, and read the conference papers posted at NationalDemocracySlam.com.