FairVote Reformer: Spotlight on Projections in 85% of 2016 Congressional Elections 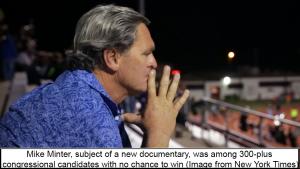 On November 6, 2014, more than two years before the 2016 congressional elections, FairVote projected the outcomes of the 2016 congressional elections in more than 85% of U.S. house seats. In other words, FairVote projects that 373 house districts are so deeply entrenched for one party that the incumbent can keep their seat just by seeking re-election,
irrespective of who else runs or how much money is spent in the race.

Whole regions of the country are politically dead. We project winners in every seat for 27 states. In a group of 14 southern and border states, we project winners in 125 of 126 seats – and 123 seats even if every election were an open seat with equal financing. This means that literally hundreds of districts are beyond competition with real consequences for voters being part of meaningful debates. For a powerful example, see the New York Times “op-art” piece by Marco Ricci, following the candidacy of Mike Minter, a Democrat running in what may be the most Republican district in the nation.

A partisan skew that distorts accountability has also emerged. Of the 373 safe seats, Republicans hold 212. That means that Republicans only need to win six of 62 unprojected seats to win 218 seats and keep their majority. To retake the House, Democratic candidates would likely need to win some 55% of the vote.

Shortly after the election, our executive director Rob Richie authored a piece in The Nation highlighting just how unfair congressional elections have become. It echoed pre-election pieces making the case for fair representation voting by Krist Novoselic in the Open Standard and by Reihan Salam in Slate. These pieces demonstrate that broken congressional elections hurt everyone, and how there is an all-partisan solution on the table.

FairVote has consistently promoted the fair voting solution. By noting that the problem is not merely gerrymandering but actually inherent in districting itself, the way out becomes clear: replace the exclusive use of winner-take-all districts with fair representation voting. With fair representation voting, voters have the power to choose their representatives, irrespective of what district they happen to be drawn into, using American, candidate-based forms of proportional voting like ranked choice voting. This constitutional and historically-grounded way of conducting elections could be applied to Congress by using larger districts, each electing between three and five candidates. We are helping to craft model legislation that would enact these practices.

FairVote has drawn sample maps demonstrating how this solution would truly represent the left, right and center of every state while making every vote count. Those maps can be easily viewed along with detailed analysis at fairvoting.us. Look up your state, and see what fair voting could mean for you.