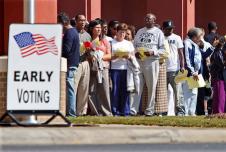 Recent presidential elections have exposed enormous problems with our voting processes. From long lines to butterfly ballots, from voter purging to voting equipment failures, it is clear that the decisions that election officials make impact the way our democracy functions, although these decisions are usually made outside the public eye.

There are a number of facets involved with the Democracy SoS Project. One of these is research—in 2008, FairVote surveyed more than 400 local election officials in 10 swing states. We issued a five-part series of reports detailing election preparedness and uniformity in Missouri, New Mexico, Colorado and Virginia. The national report includes counties with a population of over 500,000 in six additional states.

Another aspect of Democracy SoS is voter guides. Voters are inundated with information about presidential and gubernatorial candidates, but are often poorly informed about offices like Secretary of State. We publish candidate biographies, focusing on electoral reform positions and campaign promises related to elections.

Democracy SoS also includes candidate surveys. In order to better inform voters about their candidates’ stances, each candidate will be asked to complete a survey covering a range of issues, including voter education, election planning and election integrity. Download a sample candidate survey.

One of the most important parts of Democracy SoS is its coalition partners; FairVote works with a range of local, state and national organizations to promote democracy. National partners include: Common Cause, Advancement Project and Demos.

Issues in focus during the 2008 election cycle: