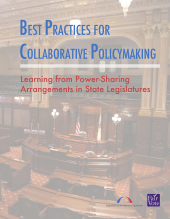 Rising partisanship and polarization have made it increasingly difficult for legislators to engage in the bipartisan cooperation necessary for effective policymaking. While much of this dysfunction stems from entrenched national problems – a polarizing electorate, flawed elections, and an increasingly corrosive media environment – other causes originate from within our legislatures themselves.

In Best Practices for Collaborative Policymaking: Learning from Power-Sharing Arrangements in State Legislatures, FairVote and the Bipartisan Policy Center examine power-sharing agreements in state legislatures in order to draw lessons about bipartisan cooperation.The report identifies two factors that significantly impact the prospects for collaboration: the level of majority party control over the agenda, and the strength of personal relationships across party lines. It recommends specific reforms that can help legislators to bridge the growing ideological divide and work together for the good of their constituents.

Accompanying the report is an overview of the status of legislative rules impacting collaboration in the 50 states, with highlights presented in the map below, and the full database available here.

Clearing a Path for Collaborative Legislation

Building Trust across the Aisle

Problem: Bipartisan cooperation is unlikely without strong, civil relationships between legislators and legislative leaders of opposing parties. The report's case studies illustrate the importance of building relationships between legislators of opposing parties that are characterized by civility and trust, as a prerequisite to engaging in bipartisan collaboration. This is especially true of legislative leaders.

Solution: State chambers should take proactive steps to foster civility and trust. Collaborative policymaking requires that legislators with different ideals and perspectives be willing to engage one another in the deliberations and bargaining necessary for them to find common ground. In the absence of trust and civility, legislators are unlikely to see these negotiations through, or initiate them in the first place. Strategies for improving legislative relationships include: