Time to Change an Unpopular Vote Super-Majority of Democrats, Republicans, and Independents Would Prefer a National Popular Vote for President

According to a Gallup poll taken January 8-9, 2013, 63% of Americans would support “doing away with the Electoral College and basing the election of the president on the total vote cast throughout the nation.” Only 29% supported our current method of electing the president.  Significantly, at least 60% of voters in every single age group and supporters of both major political parties and independents said they would prefer a popular vote for president.

This is not surprising: after all, the 2012 election demonstrated more than ever before how broken our current system for electing the president is. Because 48 states and the District of Columbia allocate their Electoral College votes on a winner-take-all basis, presidential candidates and their supporters only target voters in those states whose outcomes are not certain. Barack Obama and Mitt Romney only held public campaign events in ten states after the Democratic National Convention and spent 97.5% of their television advertising money in just nine states between April 11 and Election Day.

Indeed, public dissatisfaction with winner-take-all Electoral College laws was palpable throughout the 2012 campaign season. Not only did journalists and pundits emphasize just how unequally the presidential candidates were treating voters in swing and safe states, but there was also a fear during the final months of the campaign that, just as in 2000, the winner of the most votes nationwide would lose the Electoral College and therefore not become president.

This is not the first time that Gallup has reported majority support for a popular vote for president, as summarized in a a previous FairVote analysis. Since 1944, the majority of Americans has supported altering the way we elect the president,[1] from a low of 50% in 1960 (compared to the 28% who disapproved of reform that year) to a high of 81% in 1968. Politicians were aware of the nation’s dissatisfaction, which is why the House of Representatives passed the Bayh-Cellar amendment, abolishing the Electoral College and replacing it with a national popular vote, 339 to 70 in 1969. Although the Senate killed the amendment with a filibuster in 1970, public disapproval of the current system has remained to this day. 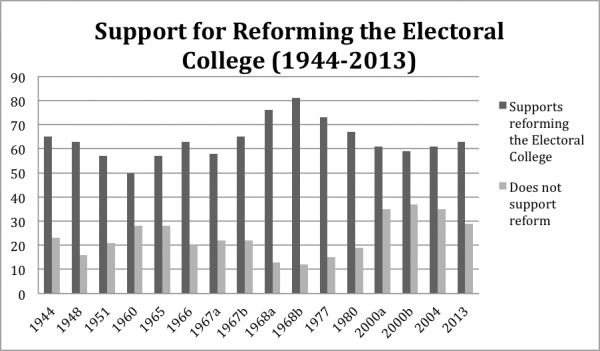 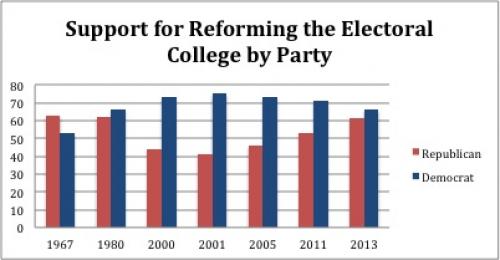 While Gallup polls have not ascertained the level of support for the National Popular Vote Interstate Compact, which was introduced to the country in 2006, this most recent poll is certainly good news for those who support it -- the breadth and depth of this support for change is consistent with the dozens of state polls that National Popular Vote has conducted itself. At this point eight states and the District of Columbia, controlling 49% of the votes necessary to activate the compact, have signed it into law, and more than 2,100 state legislators have endorsed for voted for the plan. As large majorities of both Republicans and Democrats want a national popular vote for president, their elected officials now have every incentive to join this remarkable reform movement.

[1] It should be noted that the survey results for 2000 were taken after Election Day, but before Bush had been declared the victor in Florida, and therefore, in the Electoral College. Therefore, the results from 2001 may have been more reflective of the public perception of the Electoral College following the 2000 election.

[2] Throughout this time, the replacement method for electing the president has not been uniform in Gallup polls. From 1948 to 1965, participants were asked whether they would prefer the current method or a method in which electoral votes were allocated proportionally within a state (i.e. if a candidate received a third of the vote within a state, they would receive a third of that state’s electoral votes). In 1944 and 1966-2013, the alternative method proposed has been a national popular vote for president.