The Paradox of Fairness and Competition in Virginia Redistricting

The most recent scuffle over congressional redistricting in Virginia illustrates how poor a job single-winner districts do at achieving meaningful elections with fair results. 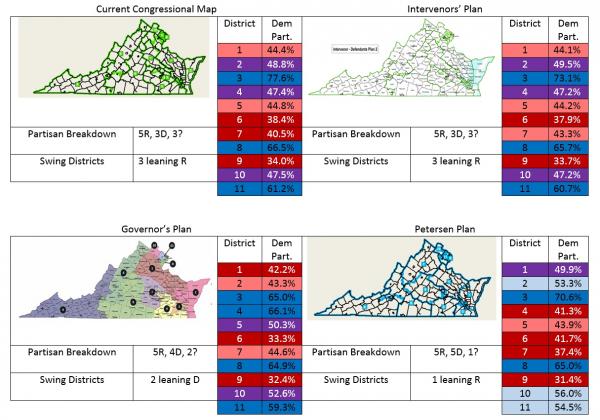 The maps and tables above present the impact of four approaches to congressional districting in Virginia. As part of an amicus brief submitted in federal court, Common Cause analyzed these maps: the first two (on top) it describes as partisan gerrymanders, giving the Intervenor’s plan a grade letter of “F.” Common Cause gave the bottom two plans “A’s” and described them as not being partisan gerrymanders.

Virginia is evenly split in terms of overall partisanship. A fair outcome in its 11 districts would be the election of five Republicans, five Democrats, with one seat plausibly going to either party’s candidate. By this standard, the Petersen plan does seem to do the best job of achieving fair representation, and both the “A” plans outperform the two other maps. In that sense, Common Cause is right.

However, achieving fair representation through single-winner districts is inherently top-down: in the bottom two maps, and especially the Petersen plan, fair representation is imposed on Virginia voters. The two “good” maps work by taking one or two of the competitive districts of the “bad” maps and making them safe for the Democratic nominee. The end result is that at most two out of 11 seats will be competitive, with more safe seats than in the current plan.

Competition in congressional elections matters for meaningful participation. Shortly after the 2014 election, FairVote released projections for 85% of 2016 U.S. House races. Based on the success rate of our projections in 2010 and 2012 (more than 99.9% accurate), we expect every projection to be accurate. That paints a stark picture of how meaningful our votes can be in deciding who will represent us in Congress. Without a meaningfully competitive general election, incumbents can sail to re-election without fear of any opposition. These legislators lack accountability once in office, except to the increasingly small and unrepresentative group of primary election voters.

Candidates elected in safe districts also tend to have more polarized voting patterns than those in swing districts. The diminishing number of swing districts matches the pattern of the disappearing congressional bridge-builders who work across party lines.

The “grade A” maps that correct for partisan gerrymandering in Virginia exacerbate all of this. Fewer voters would have a meaningful vote in the general election, fewer candidates would be accountable to their district’s voters, and fewer Members of Congress would have incentives to work across party lines for sensible, cross-partisan legislation.

Fortunately, there is an alternative that combines the best of what Common Cause is right to promote (an independent redistricting process) while still achieving a level playing field for parties and an equal playing field for voters in the Ranked Choice Voting Act.

Consequently, every district will include meaningful competition both within and between the two major parties in the general election. With larger districts covering diverse areas, it becomes nearly impossible to gerrymander such a system to create safe districts – and under the Ranked Choice Voting Act, which would institute this system, independent districting commissions would draw lines according to criteria that would be prohibited them from trying. Instead, every district would feature meaningful two-party competition, and it would even elect both Republicans and Democrats in every part of the state. At fairvoting.us, we demonstrate that this can be accomplished by combining existing districts in literally every single state that elects at least three Members to Congress.

This approach is strong for upholding the Voting Rights Act as well. Under each single-winner district plan above, African American voters in one district (district three under the current map) have the power to elect a candidate of choice, but more than 70% of the African American population lives outside of that district. Under the fair voting plan, over two-thirds of African Americans in Virginia would be able to help elect a candidate of choice in super district C, and Asian and Latino voters would be able to elect a candidate in coalition in super district B, which is not the case in any of the current map’s 10 majority-white districts. Further, with ranked choice voting every voter will gain influence because candidates will seek to be their second or third choice.

However, the fairness and competitiveness of this map does not rely on that particular configuration. In fact, combining similarly situated districts from the other three maps pictured at the beginning of this article renders the following results:

As these tables demonstrate, four very different maps, two partisan gerrymanders and two “fair” maps, all render the same results when combined into three and five-winner super districts with ranked choice voting. Each of them would render fair results and universally competitive elections.

That is because, in contrast to single-winner districts, ranked choice voting in multi-winner super districts allows representation to be determined bottom-up by the voters, not imposed from the top down. More voters gain representation regardless of the overall makeup of their districts, so the lines matter less.

With ranked choice voting, we have results that reflect voters and result in competitive general elections in nearly every case.