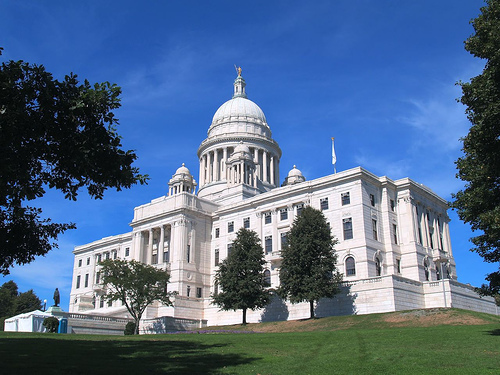 The National Popular Vote plan (NPV), which will guarantee the presidency of the United States to the winner of the popular vote in all 50 states and the District of Columbia, is poised to pass its halfway mark to implementation after both houses of the Rhode Island General Assembly passed the bill yesterday with votes of 30-4 in the Senate and 41-31 in the House. The vote earned real bipartisan support, including more than 75% of members of each major party in the state senate.

Governor Lincoln Chafee, who coauthored an op-ed with FairVote Rhode Island's Ari Savitzky five years ago in favor of NPV, is expected to sign the bill into law once it officially makes it out of the legislature and unto his desk. If and when Rhode Island and its four electoral votes become part of the NPV compact, the participating states will together have 136, or more than half, of the 270 electoral votes needed to activate the compact for the 2016 election.

It's been a long road in Rhode Island, one on which FairVote Rhode Island and its; past and current leaders Ari Savitzky, Matt Sledge and Christina Morra have played a key role. Both chambers in Rhode Island in fact passed NPV before, but the previous governor vetoed the bill. FairVote applauds their work, the remarkable National Popular Vote advocacy team and the reform leaders in the Rhode Island legislature who did such a good job advancing the bill this year

Rhode Islanders have every reason to prefer a national popular vote system to our current state-by-state winner-take-all one, which leaves them irrelevant in presidential elections. FairVote's new factsheet on Rhode Island, which will be part of our forthcoming update of Presidential Elections Inequality, explains this well. Because Rhode Island is heavily Democratic - about 60% of Rhode Islanders have voted for the Democratic candidate for president in the last five elections - there is no chance that any campaigning in Rhode Island would affect who would receive Rhode Islands' four electoral votes in an election year with a close national vote. Therefore, Rhode Island received zero campaign visits and zero television advertising money during the 2012 general election, just as it had not received any attention during the several elections prior.

NPV will benefit Democratic and Republican Rhode Islanders alike, which is why the bill received such strong bipartisan support in the Senate, and passed quickly with a vote of 30 to 4. On the Democratic side, only two senators voted against the bill, and on the Republican side, only one did (an independent provided the fourth "nay" vote).

On the House side, the debate lasted longer, but ultimately, Representative Edith Ajello's (D-Providence) insistence  that "Rhode Island voters and Americans across the country are clear, they want a popular vote for president," won the day, putting Rhode Island on what she called, "the right side of history, as one of the states leading the charge for this important change." (quoted in this Providence Journal news story on NPV's victory)

NPV has also made important progress in Oregon and New York, again with strong bipartisan support. In Oregon, the bill passed the House for the first time by a vote of 38-21 in late April, and is under consideration in the Senate. In New York, NPV passed the Assembly for the first time this week - with a bipartisan vote of 100-40, after a two-hour debate full of insight and substance - and is moving in the Senate, where it has won twice before.

It has been a very exciting week for those working to reform our Electoral College system and give every American an equal vote in presidential elections. With every new state win, we believe momentum will build for more victories, leading to our first-ever presidential election in 2016 when every vote in every corner of every state will be equally important.