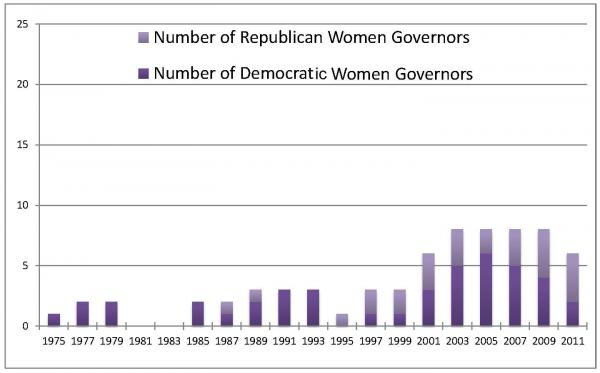 Leadership is a difficult concept to deconstruct. Too often leadership is reduced to a shallow list of characteristics combined to satisfy our culture's leader archetype. This familiar narrative defines a leader as strong, decisive, ambitious and often male. Falling prey to these notions, political parties recruit and back too few women for higher-level executive positions. When women get to positions of leadership, they are often seen as strong leaders who then earn re-election, including Margaret Thatcher (United Kingdom), Angela Merkl (Germany), Indira Gandhi (India), Mary Robinson (Ireland) and Golda Meir (Israel). Thus, the main challenge for women is not leadership, but rather the institutional serotypes that hinder their initial election to higher-level executive positions.

Parties acting on leadership preferences, based on qualities associated with men, affect who is and is not elected in the United States. As parties fail to support women candidates, women fail to gain representation in government. In 2008, Hillary Clinton became the first woman to even come close to earning presidential nomination from a major party. Of our 100 largest cities, only 9 have women mayors. And next year, women will occupy a mere 10 percent of gubernatorial positions across the nation, the lowest number in years.

Gaining governorships is significant for the women's representation movement because inroads on this front would annex new political territory for women. While only four states (Delaware, Iowa, Mississippi and Vermont) have failed to elect a woman to congress, nearly half of all states have never elected a female governor. Though a well-financed, well-qualified woman today has the same chance to win elective office as a man, parties recruit few women to enter these races because gubernatorial races are anomalous as single seat races. While several seats are filled in legislatures, only one seat can be filled in gubernatorial elections - and parties tend to see that candidate as a man, with women more likely to be tapped for less prominent statewide offices like lieutenant governor and secretary of state.

Gubernatorial elections were held in 11 states in 2012. Of the 22 candidates nominated by a major party, there was only one female candidate, Maggie Hassan, who will be New Hampshire's next Governor. Hassan will also be the nation's only Democratic woman governor, as Democrats Beverly Perdue of North Carolina and Christine Gregoire of Washington chose not to run for re-election this year. 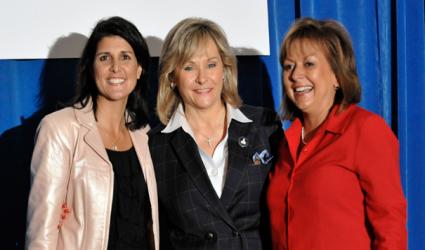 Big wins for Republicans in 2010 increased the number of female governors, as three new women were elected to office (Mary Fallin of Oklahoma, Nikki Haley of South Carolina, and Susana Martinez of New Mexico). Major credit for their rise goes to former Alaska governor and 2008 Republican vice-presidential nominee Sarah Palin, who boosted all four of them with endorsements in contested primaries as part of her support for what she termed "mama grizzlies."

In contrast to Gov. Palin's direct involvement in primaries and elevation of women candidates, no comparably influential heavyweight in the Democratic Party has pushed for women to run and backed them in primaries. EMILY's List certainly has helped many Democratic women over the years - with its acronym of "Early Money is Like Yeast" suggesting the importance of helping women win primaries in winnable races - but of the 50 states' last races for governor, Democrats have nominated only six women.

An absence of female candidates and the two losses in 2010 led to the decline in Democratic women governors, particularly in the wake of President Barack Obama's appointment of two high profile female governors, Janet Napolitano of Arizona and Kathleen Sebelius of Kansas, to his cabinet and the stepping down of both Perdue and Gregoire this year.

Despite the role of Gov. Palin in 2010, the overarching issue at hand is actually nonpartisan, as both parties are guilty of the same offense. Political parties are twice as likely to encourage a man to run for office than a woman, disadvantaging women before the race even begins. This disparity in support is already evident in the 2013 gubernatorial races.

New Jersey and Virginia both will hold gubernatorial races next year that are seen as competitive, with Republican having captured both offices in 2009. Because women favor Democrats by a seven-point margin, according to the Center of America Women in Politics, and because of the success of Democratic women in U.S. Senate races this year, one might assume Democrats would take the initiative to back viable female candidates, as to advance a relationship of mutual support. However, this does not seem to be the case.

In the New Jersey race, the Democratic challenger will square off against Governor Chris Christie, a popular, national figure who graced Mitt Romney's shortlist of possible running mates. Analysts highlight several likely Democratic candidates, including Newark Mayor Cory Booker, Senator Richard Codey, Assembly member Lou Greenwald and one woman, State Senator Barbara Buono. As a rising star in the Democratic Party whose victory would make him one of only two African American governors, Booker is expected to be the party's candidate of choice - with the November choice likely to come down to two men.

In Virginia, all probable candidates, both Republicans and Democrats, seem to be men. Two Republican statewide officeholders are vying for the GOP nomination, while former Democratic Party chair Terry McAuliffe has seemingly cleared the field for his nomination.

The year of opportunity for women gubernatorial candidates is likely to be 2014. Across the country, 36 gubernatorial elections take place, theoretically creating space for female contenders - particularly Democrats, as most races will likely have Republican incumbents. The challenge is convincing parties to recruit and rally around qualified women who are ready to lead. To advance gender parity in politics, parties must recruit women candidates at the same rate as men. Qualified women are abundant; they just don't always satisfy the fallacious leader archetype. Shifting perspectives away from the masculine leader stereotype is key. Parties can play a significant role in this cultural shift through procedural reform. They can lead by calling for a national consensus on strategies to enhance women's representation.