On May 4th, the Missouri legislature voted to override Gov. Jay Nixon's veto of House Bill 193, a bill which would redraw state lines using the 2010 census. In an unexpected turn of events, seven Democrats joined with the Republicans in a 104-44 vote to override Gov. Nixon's veto and pass the new lines into law, the first occurrence of such an event in Missouri history.

Since Missouri's population growth hasn't kept up with the rest of the country, the new lines needed to eliminate a district and integrate pieces of it into conjoining ones. Not surprisingly, the Republican legislature decided to erase the third Congressional district (which was leaning Democrat) and split its former territory between three neighboring, Republican-leaning districts.  As could be expected, the Governor accused the new districts of being partisan and sent it back to the state legislature with his veto - but to no avail.  Below is the state's new congressional map to be used next year. 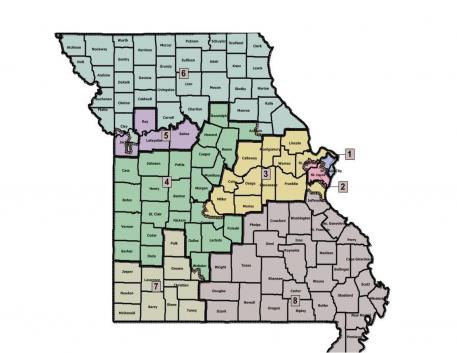 As is visually obvious, there is quite a bit of gerrymandering in the 3rd, 4th and 5th district which either place Democrats into a hyper-concentrated district (as is the case with St. Louis, district 1) or extend out districts which were Democrat before and combine them into Solid Republican districts (as is the case with former district 5 being expanded into the territory of district 4 and 6).

Although FairVote lacks hard partisan data on the new districts, we can still estimate with relative certainty that the new map will drop Democrats below the threshold of exclusion (50%+1 in a first-past-the-post system) in territory that was leaning their way before the new lines were drawn.

We did want to showcase a better way for Missouri, however - -one grounded in American history with multi-seat congressional districts and use of non-winner-take-all voting system in various cities around the country.

If we were to redraw the state of Missouri into two super-districts by combining districts 1-2-3-8-7 and districts 4-5-6 like the map below (SD-1 with 5 seats, and SD-2 with 3 seats) using a proportional voting system such as choice voting or cumulative voting, we would successfully return partisan balance and competitive elections to the state by reducing the threshold of exclusion to about 17% for the 5 seat district and just over 25% for the 3 seat district. By performing this simple task, we can end the harmful effects of gerrymandering by expanding boundaries and allow any group holding a bloc-vote at or near the threshold of exclusion to elect a like-minded representative. Looking at SD-1 (with a threshold of exclusion of 17%), Democrats will be guaranteed to take 2 seats, Republicans 2 seats, and the fifth competitive seat being Republican leaning.

In SD-2 (with a threshold of exclusion of 25%), the Democrats will be guaranteed to take a seat, the Republicans a seat, and the third competitive seats leaning Republican.

This means that, on an average year, 5 seats will go to the Republicans and 3 seats will go to the Democrats (very close to the current partisan proportions of the state). Therefore, the delegation statewide would likely be either 5-3 Republican of split between the parties, which is a fair reflection of the state's current overall partisanship. Of course this would vary with the strength of candidates and national trends.

Using a proportional voting system with two super-districts would allow Missouri's electoral outcomes to reflect the true partisan makeup of the state by allowing Democrats which currently reside in district 6 to vote for a strong candidate from district 4 and the Republicans which currently reside in district 1 (where their vote wouldn't matter since district 1 is guaranteed to go Democrat) to vote for their ideal Republican candidate from district 7.  Using a proportional voting system would clearly give voters the most choices possible and ensure each vote counted by allowing wide-spread support to be concentrated into a single candidate. When compared to a single-member district system, a proportional voting system relieves us of our democracy deficit. It's a matter of voter equality.