Iraq's 2010 Parliamentary Election - Part 1: Chronicles of a Struggle for Democracy An introductory overview 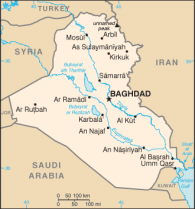 Preparations for the Iraqi parliamentary elections, now scheduled for March 7, 2010, have turned out to be especially chaotic and contentious. This is why, we, here at FairVote, are excited to have this great opportunity to catch you up on what has been going on and to analyze what, in this electoral process, is at stake for the fledgling Iraqi democracy in a series of comprehensive blog posts! The key element of this series will be how Iraq has been working on building an inclusive fair voting system by relying on proportional representation (PR) instead of winner-take-all.

For the first time since the 2005 Constitution was adopted, Iraqi voters on March 7th will have the opportunity to renew their Council of Representatives, which as of today is the only chamber of the Iraqi parliament. On the same day, a referendum will be held on the presence of US troops. At a time when the US troops in Iraq dropped to 98,000, the lowest level of their presence in the country since the 2003 invasion, this is supposed to be a huge step towards their absolute sovereignty by producing a legislature that fully represents Iraq.

However, instead of appeasing sectarian divisions that followed Iraq’s 2005 legislative election, the electoral process has revealed massive ongoing conflicts between the Iraqi parties and ethnic groups, creating new fears about Iraq’s stability. In fact, due to the difficulty last year in passing an electoral law through both the Parliament and the Presidential council (that has veto power), the voting date had to be delayed from January to March. Then, last month, another political crisis emerged when the Iraqi Electoral Commission disqualified 511 candidates because of their alleged ties to the Baath Party of Saddam Hussein, delaying the beginning of the campaign until February 12th. There are also concerns about fraud in the elections.

Another point of interest regards the outcome of the elections. Iraq uses a proportional system in order to allow each ethnic group to receive fair representation. This implies that Iraqi parties will need to build a ruling coalition, and thus creates room for real political debates that have to overcome sectarian rifts.

Furthermore, another huge consequence of the March elections is the disappearance of the Presidency Council, which has to act unanimously and is composed of the President of Iraq and two Vice-Presidents elected with a two-third majority of the Iraqi Council of Representatives. Its creation was a transitional measure in order to maintain harmony among Iraq’s three largest groups: Shiite Arabs, Sunni Arabs and Kurds. After the election, the President will be autonomous and will only need a simple majority of the Council of Representatives to be elected. This obviously increases anxiety about potential sectarian rifts. However, ultimately, and thanks to the PR in the Parliament, the President will need to earn support from more than one party and be responsive to more than one group within Iraq.

18.9 million registered voters will have to choose among 6,500 candidates appearing on the ballot on March 7th. In an effort to involve as many citizens as possible while maintaining the integrity of the election, they will use an open list form of PR, contrasting with the 2005 closed list system. However, the allocation of the seats will be similar: they will be allocated regionally, with additional compensatory seats allocated to parties whose national share of the vote is not reflected by the seats won at the provincial level. This is another reason why a PR system is great: it gives parties a strong incentive to run candidates in all the areas, since they know that each vote contributes to make them earn seats at the national level.

There is a lot at stake in this parliamentary election. Iraq seems to be working really hard on building a stable, multiparty pluralistic system through a fair vote. This is why we want to break down the Iraqi electoral system and the background of the campaign. This series of posts about the upcoming Iraqi elections aims at showing that, even if you spend a huge amount of time trying to establish the fairest system possible, the context ultimately determines the result.

Stay tuned for our next post that will feature a more detailed background on the Iraqi electoral system!