Gerrymandering, the film This weekend in DC

Gerrymandering, (77 minutes, not rated), will be playing this Friday at the new West End Cinema in DC.  The film, which cites FairVote Executive Director Rob Richie and works closely with EndGerrymandering.com, is a nonpartisan look at redistricting efforts.

Gerrymandering, named for Gov. Gerry, is the act of drawing districts, after a census, with the intent to effect voting outcomes in favor of a candidate, political party, race or other factor.

The film Gerrymandering takes an unbiased approach to analyzing how both major political parties benefit, and are injured by the practice.  Noted figures such as Arnold Schwarzenegger, Howard Dean, and others are profiled and interviewed.

As Gov. Schwarzenegger states in the film, gerrymandering has the ugly effect of creating a situation where “the legislators are picking the voters”.  Gerrymandering chronicles, among other events, the efforts of the Gov. to pass Prop 11 in California, which would take the power to redistrict out of the hands of state officials and put it into the hands of a concerned citizens’ panel.  Schwarzenegger claims that gerrymandering not only reduces competition, but also suppresses the voice of the population as well as diminishes overall voter turnout.

The film also highlights the careers of several politicians who have been both helped and harmed by gerrymandering. 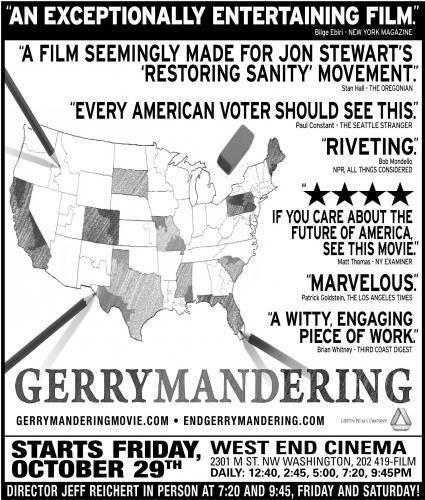 One such example in the film is that of the 57th District in Brooklyn.  Hakeem Jeffries ran a surprising successful campaign there in 2000 against incumbent Green, but ultimately lost the election.  In 2002, he realized he could not run again in that district; while he had not moved from his home, it appeared his home had moved from the district.  Green later plead guilty to corruption charges, after billing the state for his travel expenses, and resigned the rest of his term.

Other case studies involve New Orleans and Texas, where lines are drawn so bizarrely they guarantee elections before voters ever reach the polls. Some districts are only as wide as a single street in some areas, drawn that way in an effort to connect two geographically detached neighborhoods.  Other districts can only be traveled by boat, as they are split into pieces by large bodies of water.

NPR states the film is “guaranteed to make patrons furious at the folks who draw the lines for voting districts.”  Director Jeff Reichert hopes that the timing of the film may impact the November 2010 elections as well as the redistricting following the latest census.

Reviews can be found here, and here.