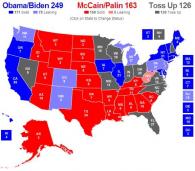 Howard Dean became the Democratic Party Chairman in 2005 largely due to his much-discussed 50-state strategy, committing to a campaign in every part of the country. The DNC under his leadership did put more funding into parties in “red” states and areas, and had some payoff in 2006 and 2008. But in the 2008 presidential race, the true 50-state campaign was only in the primary season governed by party rules that made most every vote count across the country. Once the major parties’ nominating conventions were over, things changed. More than 98% of all campaign spending and advertisements were spent in the 15 most contested battleground states, just like in 2004.

The supposed 50-state strategy was credited for Democratic successes, and there have been discussions in Republican circles about championing a similar movement in their party – particularly given their victory in the special election to fill Ted Kennedy’s U. S. Senate seat in Massachusetts. It certainly seems that the Republicans plan on using this strategy in the 2010 congressional cycle to put seats in play that have been safely Democratic for a generation.

But when it comes time for presidential elections in the fall 2012, it will be back to the 15-state strategy for both parties.

Yesterday, the Republican Party announced that Tampa, Florida would be the host of the 2012 Republican National Convention. This should come as no surprise to anyone who follows recent presidential campaigns, as Florida is the largest contested state in the country and, under our current Electoral College system, only contested states receive campaign attention.

Other cities in the running for the Republicans were Phoenix, Arizona and Salt Lake City, Utah. While Arizona’s recent controversial immigration reforms likely played a role in Phoenix’s defeat, the reason for Salt Lake’s elimination, according to the New York Times, is that it was  “seen as doing little to build the party, officials said, considering that Utah is solidly Republican.” In contrast, Florida was understood to be “a perennial presidential battleground state.”

On the Democratic side, they are currently considering locations for their convention as well. The Times reported: “Democrats have not disclosed their list of prospective cities, but officials say applications are under review from several places, including Charlotte, N.C., Philadelphia and St. Louis.”

Those cities would fit the 15-state narrative as well. North Carolina was Obama’s narrowest victory in 2008 and Missouri was his narrowest loss. Pennsylvania has been the second largest battleground state after Florida for years.

Of course the closeness of the state’s electorate is not the only factor in choosing the location for a convention. For instance, in 2004, George Bush was nominated in New York and John Kerry was nominated in Massachusetts, two states that have consistently gone for Democrats.

But today, the stakes are clearer and the battlegrounds are more entrenched. More than two years out, both parties already know which states are up for grabs and which states are not. Contrary to what many believe from the 2008 election – that it “expanded the battlefield” – the number of swing states has shrunk drastically over the years.

As FairVote details in its upcoming Presidential Election Inequality report, when John F. Kennedy defeated Richard Nixon in 1960, 33 states were within 5 percent above or below Kennedy’s national vote share. Even in Reagan’s big victories in 1980 and 1984, 30 states were within that same bracket of his national vote percentage. However, in both 2004 and 2008, that number fell to 19, the lowest number in at least 50 years. That means that more states now are easily taken for granted as Democrat or Republican in a close election than at any point in modern political history.

Get ready to hear about “national campaigns” and “50-state strategies” for the next couple years, but when it comes down to allocating resources and naming locations for key events, don’t be surprised when it looks more like a 15-state than a 50-state campaign.