Electoral College Rules and the Politics of Immigration Reform 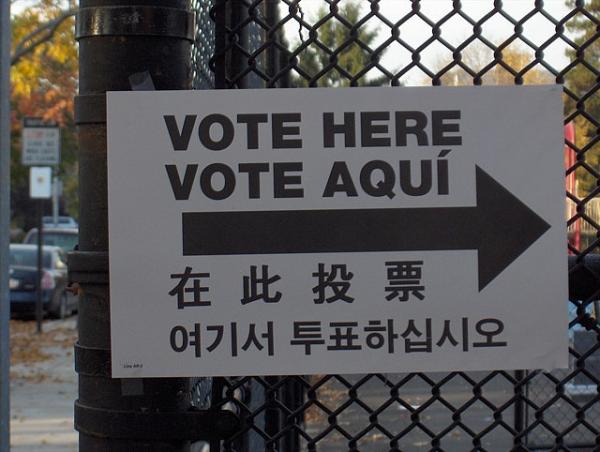 Barack Obama recently announced that a top priority of his administration would be passing comprehensive immigration reform this year, and Republicans, still reeling from their defeats in the November elections, are taking his renewed focus on this important economic and social issue as an opportunity to reach out to racial minority voters, among whom they have been consistently losing support. Given that political considerations are influencing both Democratic and Republican stances on immigration, it may be useful to review how our current Electoral College rules might affect the political influence of racial minorities. Are they helped or harmed by the current rules? The answer, as is often the case with electoral politics, is complex.

The two racial groups that have made the largest partisan shifts in recent years are Latinos and Asian Americans. From 2004 to 2014, Latino support for Democratic presidential candidates increased  from 53% to 71% and Asian American supported increased from 56% to 73%. This shift among Asian Americans has been especially dramatic, considering that in 1992, Bill Clinton won only 31% of the Asian American vote.

To make this trend even more concerning for Republicans, the Latino and Asian American share of the electorate has been increasing, from 2% of votes cast in 2004 to 3% of votes cast in 2012 for Asian Americans and from 8% to 10% for Latinos. In short, two groups that already make up a combined one-eighth of the national electorate are becoming both larger and more Democratic. And while Republican popularity among white voters remains consistently high, the white share of vote is shrinking, from 77% in 2004 to 72% in 2012.

This shift in the makeup of the national electorate, and with it, its political preferences, would be alarming to any political party, regardless of electoral structure, but some are speculating that it is the growing presence of Latino voters in the three swing states of Florida, Nevada, and Colorado that is incentivizing this shift. Latinos, who made up 17%, 19%, and 14% of the voters in these states respectively in 2012, compared to just 10% of the voters nationwide, substantially preferred Barack Obama to Mitt Romney, so if Republicans could make headway with them, perhaps they would be on their way to electoral victory in one or more of those states in 2016.

But while it is true that Latinos are overrepresented in these three swing states, they are in fact underrepresented in swing states in general. While 9.4% of the American citizen voting-age population (CVAP) is Latino, and 3.5% is Asian American, these groups only made up 5.8% and 1.8% of the CVAP in the 12 states that received any meaningful presidential campaign attention in the 2012 general election respectively. Put another way, they only made up 57% and 51% of the share of the potential electorate with the ability to alter the electoral outcome that they would have under a national popular vote.

In addition, Latino and Asian American voters are far more likely to live outside of swing states than their white and black counterparts. In 2012, 68.4% of the nation’s CVAP lived outside of the 12 states that received meaning attention from the presidential candidates during the general election. White people were underrepresented among these spectator states’ CVAP, making up only 65.6%, and black people were only slightly overrepresented, with 69.7% living in spectator states. Conversely, a whopping 83.7% of the Asian-American CVAP lived in spectator states, states that received no attention from the presidential campaigns, as did 80.5% of the Latino CVAP.

Whether Latinos are given any real advantage under our current Electoral College system can be debated. But without a doubt, the share of Latinos in swing states has plunged from a few decades ago, when most of the states with large Latino populations (like California, New York, and Texas) were electorally competitive. In 1976, 73% of the nation’s Latino population lived in an electorally competitive state with a population that was at least 6% Latino. Today, only 13% of Latinos are in such a position. Incidentally, the share of black Americans in the same position has been on a similar trajectory: in 1976, 74% of black Americans lived in a swing state in which they made up at least 6% of the population, while today, only 19% do.

Regardless of the geographic distribution of Latino voters, it is unclear what sort of affect this policy shift among Republicans will have on Latinos’ views of them. In a September 2012 poll by Fox News Latino of likely Latino voters nationwide, 48% said that the economy was the most important issue when deciding for whom to vote, and only 6% said that immigration policy was.

In addition, the majority of Latino voters in these three swing states are of the two national origins least affected by immigration reform: Cuban Americans (the United States has separate immigration policies for Cubans fleeing the island’s communist regime) and Puerto Ricans (who, as American citizens, are able to move to the continental United States whenever they want). In Florida, the swing state with the largest Latino population, 32% of the Latino voting eligible population is Cuban-American and 28% is Puerto Rican. While some of these voters may certainly appreciate what appears to be a Republican Party more inclusive of Latinos, the new policies will do little to affect their own communities, and therefore may not do much to shift the trend by both groups towards the Democratic Party.

Nevada and Colorado contain more eligible voters who might be impressed by Republican attempts to create a more inclusive and forgiving immigration system. A full 72% of Nevada’s eligible Latino voters is of Mexican descent, as is 70% of Colorado’s. As most anti-immigrant rhetoric is directed at undocumented immigrants, and the majority of undocumented immigrants come from Mexico, if these changing stances on immigration will impress any voters in swing states, it will be Nevada and Colorado’s mainly Mexican American Latino populations. But whether that appreciation will be one of the keys to Republicans’ electoral success in 2016 remains to be seen. Regardless, be skeptical of any hype about the Electoral College system creating any particular incentives for Republicans to alter their policy positions in favor of Latino voters. They likely would have been making this switch anyway.