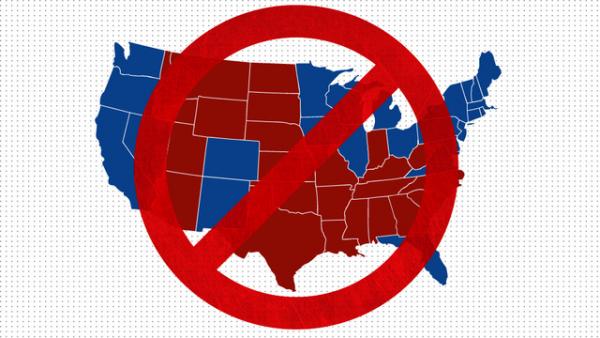 In a representative democracy, candidates should compete on a level playing field, in a system without a structural tilt towards one party, and in which the preference of voters is what determines the outcome of elections. (If you agree, sign on to our Pledge to Stand with Voters.) However, FairVote's analyses of congressional elections show a definitive tilt towards the Republican party, grounded in winner-take-all voting rules and the geographic distribution of Republican and Democratic voters. Democrats won more House votes than Republicans despite the Republicans' incumbency advantage, and we estimate that Democrats would not have regained the House this year without earning some 53% of the total votes cast in House races.

However, on the presidential level there is currently a distinct Democratic advantage, also resulting from winner-take-all rules. As discussed in past blog posts, current Electoral College rules substantially disadvantage voters in non-swing states, who have no chances of altering the Electoral College outcome and are therefore essentially ignored by major party candidates. However, in this election, non-swing state voters were not the only ones who were disadvantaged; Republicans nationwide were as well. Our pre-election analysis suggests Democrats also had an edge in 2004 and 2008, making three straight elections where a closer election could have resulted in Democrats winning the Electoral College majority while losing the popular vote.

Based on FairVote's method of calculating state partisanship (a powerful predictor of a state's future vote outcome based on its deviation from the national norm in a presidential election) FairVote can calculate what percentage of the popular vote candidates would need to win in order to win a majority in the Electoral College. Our October analysis shows that Republicans and Democrats switched from being advantaged or disadvantaged relatively evenly over the past 13 elections, but for the past three elections, it has been the Republicans who have suffered from the winner-take-all structure.

In 2008, for example, Senator John McCain would have needed to garner 51.2% of the two-party popular vote in order to secure Iowa and Colorado, the last two states that, in a closer election, would have tipped the election from Barack Obama to him. Winning only 51.1% would have only given him Iowa, tying him with Obama and leaving it to the Democratic-controlled House to pick the president. Conversely, Obama only needed 49% of the two-party popular vote to collect all the electoral votes he needed to win the White House. That means that McCain could have won the election by more than two million popular votes, but been denied the presidency.

This year, Governor Mitt Romney would have needed a similar national popular vote margin to defeat President Barack Obama. Based on calculations from David Wasserman's November 20 tally of the two-party vote, Romney would likely have needed 50.9% of the two-party division of the popular vote to win Pennsylvania, now considered to the be the "tipping point" state that would have carried Romney past the 270-vote mark in the Electoral College. Obama, on the other hand, only needed 49% of the two-party vote nationally to win Pennsylvania and a second term in office. Of course, this advantage for Obama turned out to be moot; with a current tally of 51.7% of the two-party vote, Obama far exceeded what he needed to win this election's tipping point state, doing well enough nationally to also win Virginia, Ohio, and Florida, two of which (Ohio and Florida) would have likely gone to Romney in a nationally even election.

However, all hope is not lost for Republicans. Given that the leanings of a single state could be decisive (for example, it would only take a relatively modest shift toward Republicans in Colorado or Pennsylvania for the current bias to be removed) it is possible for their disadvantage to diminish in the next few elections. While at the moment Democrats have more paths to victory through states that are competitive but still lean Democratic, that advantage may be subject to change with slight partisan shifts in key states.

Despite this potential for improvement, the only sure way to remove such bias is to make every vote in the nation equally important in every election. Bias comes from boxing up voters in states or districts and allocating representation based on winner-take-all rules rather than treating every vote with equal weight. Winner-take-all rules for electing the president on a state-by-state basis in the Electoral College and for electing the House from single-member districts create two perverse, anti-democratic effects. First, it relegates most states and congressional districts - about four-fifths of each - to uncontested, spectator status. Second, it tilts the playing field, creating the possibility for disconnect between what American voters want as a whole and how they are represented.

Neither of these winner-take-all voting rules is mandated by our Constitution. Under the current constitutional framework, we can and should enact the National Popular Vote Interstate Compact through state legislation, as has already been done in many states, and we can establish fair voting plans for Congress by eliminating a federal statute that mandates single-member districts. It's time for reformers to focus on these achievable goals, which would enhance electoral fairness and, by so doing, increase voter participation.