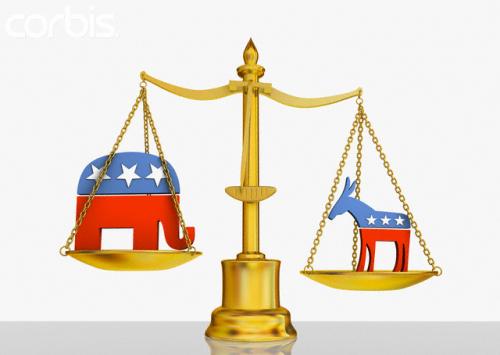 But the small state myth - so persistent that normally astute political observers like E.J. Dionne continue to tout it - is simply wrong. In the six presidential elections from 1992 to 2008, Democrats won a majority of the 13 smallest states in five of them, including in 2004 when George Bush was won the national popular vote and the presidency.

Simulating close presidential elections over the past half-century refutes the belief that Electoral College advantages Republicans as well. In addition, it highlights the irrational quirkiness of our current rules - making it all the more inexcusable that we maintain a system that results in 80% of our states being ignored in elections for our president.

To see how we simulated these elections, view our data analysis here.

As we can see, Al Gore's defeat in 2000 despite his lead of more than 0.5% in the national popular vote was far from an anomaly. The average percentage of the vote necessary for the trailing candidate to win an Electoral College majority over these thirteen elections is 50.6%, which translates into needing to win by a margin of 1.2% over the other major party candidate.

This dangerous skirting of wrong winner elections is troublesome during a time in which presidential elections are becoming ever closer. In 2000, Gore won the national popular vote by only half a percentage point and in 2004 Bush beat Kerry by almost two and a half percentage points. Obama's 7% win in 2008 was not close, but it was not a landslide either. And now, the 2012 election is gearing up to also be extremely close. As of October 11, Nate Silver's FiveThiryEight blog in the New York Times predicted a national popular vote share of 50.3% for Obama and 48.7% for Romney, a difference of only 1.5%.

Therefore, we should dismiss talk of any systematic bias toward one party or the other in presidential elections. Instead, the focus should be on the big picture: the current Electoral College system is essentially an election by lottery in close elections, which also results in the systematic exclusion of two-thirds or more of states from campaign attention. It's time for politicians to put the voters first and pass the National Popular Vote plan for president.

Thanks to former FairVote fellow Neal Suidan for his work on this piece.