After Tunisia, Egypt is burning for Democracy 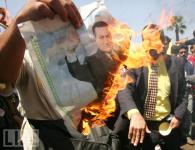 In late December 2010, when Egyptians were still stunned about the latest controversial parliamentary elections, a wind of change was blowing in the Maghreb. It started in Tunisia, where a young man named Mohamed Bouazizi immolated himself in protest of harsh political and economic conditions in his country. A graduate of one of the most prestigious universities in Tunisia, Bouazizi had been reduced to selling fruits and vegetables in street markets. What little money he earned was often stolen by policemen. Following his death, Bouazizi became a symbol of a whole Tunisian generation which suffered from unemployment and the high cost of life. After demonstrations in Tunis, Sfax, Rades and even Algiers and Setif in Algeria were violently repressed by police, the whole Tunisian people raised up to end a system that they could not tolerate anymore. Bouazizi was thus considered the first martyr of the Tunisian Revolution.

Tunisians engaged in massive protests forcing Zine el Abidine Ben Ali, president for 24 years and widely accused of human rights and freedoms violations, to leave office. After several riots, the rais (leader in Arabic) fled the country, bringing with him more than 1.5 million tons of gold, to find refuge in Saudi Arabia. It was an ironic end to the rule of Ben Ali, uncontested champion of secularism during his time in office.

A Major Issue for the US

Trying to avoid the chaos in a key geopolitical region for the United States, Hillary Clinton urged Arab leaders to take into account their peoples’ desire for freedoms and democracy.  In Qatar in early January , Clinton highlighted that “In too many places, in too many ways, the region’s foundations are sinking into the sand,” reciting litany of ills such as corruption, repression and a lack of rights for women and religious minorities.

However, if the US and generally the western world are asking for a democratization process in the region, their message is muddied by their apparent interest in keeping certain current Arab autocrats into power in the name of stability.

The Egyptian claims of the Egyptian crowds are genuinely clear as crystal, however. They are gathering by millions in Tahrir (Release) square asking for the collapse of Hosni Mubarak and his autocratic system that has repressed many of them over time and that under democracy last December when they were trying to get to the polls. Even though Mubarak has appointed a new cabinet and designated a new vice president (which was not the case during his prior terms, despite the requirements of the Egyptian constitution) demonstrators keep on showing their disapproval of his presence in the country he has ruled since 1981.

Some demonstrators have become victims, with hundreds dead and thousands injured. The police force seems to overmatched by the events and is retreating. Neverthelses, police officers are mostly in the crowd dressed in civilian clothes, repressing blindly (they also kill pacifist demonstrators) thousand of pillars who try to take benefit from the situation. Only the army is trying to end the havoc that reigns in Cairo or Alexandria’s streets, and its role will be crucial to the future of the Egyptian revolution.

Will this revolution succeed?

Indeed, the Tunisian revolution showed us that the military institution plays a key part in the success of a regime shift. The Tunisian army abandoned their allegiance to Ben Ali and refused to fire upon the civilian population.

Experts were waiting a similar move by Egyptian Police as this institution has had historical legitimacy but yesterday, it was the Army who announced that it pledges not to use force during the day of protest scheduled for Tuesday, February 1.Following principles of nonviolence reminiscent of Gandhi or Martin Luther King, some in the crowd show an incredible solidarity with army officers kissing them on the cheek or feeding them.

Although  President Mubarak seems more reluctant to leave his throne than Ben Ali was, the Egyptian walk for democracy would be well on its way with the army’s support.

Despite the regime’s prohibition of the internet and some media outlets like the Qatari channel Al Jazeera, we will closely follow events to see if, as in Tunisia, Egypt could announce new free elections coming up soon. Should they occur, FairVote and I will focus on these much hoped-for elections and rules that establish fairness for all sides.

For now, it appears that despite all his attempts to control and limit democracy, the Egyptian rais is learning that the system, as Abraham Lincoln would have said, is genuinely “the government of people, by the people and for the people”.