Below is a list of some of the more controversial US presidential elections. Scroll down for the entire list, or click on a year to read the story.

Also see the list of third party candidates that have received electoral votes.

Before the 12th Amendment, electors cast two votes for their party without specifying one as being for the president and the other for the vice president. Because of this, Jefferson and Burr received exactly the same number of electoral votes and the election was a tie.

Since there was no majority within the Electoral College, the decision was deferred to the House of Representatives, then controlled by the Federalist Party. Though Jefferson was clearly the Democratic-Republican's candidate for president, the Federalist Party considered Burr to be less of an evil than Jefferson. They tried to rally support for Burr in place of Jefferson. Burr also refused to endorse Jefferson.

The House had difficulty coming to a majority and cast 36 separate votes within one week. Though the original election was in November, the final House vote, electing Jefferson as president, did not occur until February 7, 1800. Aaron Burr was appointed as vice president.

This election prompted the passing of the 12th Amendment which introduced double balloting. The Electoral College now casts two separate votes, one for president and one for vice president.

This was the first election in which the winner of the popular vote did not become the president.

Adams, who was Jackson's most viable competition, sought Clay's support, knowing it would bring him victory. As the vote neared, Clay worked hard rounding up support for Adams. He won over western representatives whose states had voted solidly for Jackson and even promised the votes of his home state Kentucky, which had not cast a single popular vote for Adams. After more than a month of bargaining, John Quincy Adams took precisely the 13 states he needed to win, Jackson won seven, and Crawford won four.

When Adams became president, he appointed Henry Clay as secretary of state. Many have suspected that the promise of the position was why Clay agreed to support Adams.

Jackson called the whole situation a "corrupt bargain" and spent the next four years campaigning on how the election was stolen from him.

Though Jackson did win the popular vote in 1824, not all states recorded a popular vote. In six of the 24 existing states, the Electoral College members were appointed by the state legislature. These six states (NY, SC, GA, VT, LA, DE) comprised nearly 25% of the electorate.

Some states were won with very high percentages; Jackson carried 98% of Tennessee's popular vote, Adams carried 94% of New Hampshire's vote. Neither candidate had national appeal and both were absent on the ballot in at least one state.

Despite these variations in representation, Jackson's 4-year campaign highlighting the unfairness was successful. He won the presidency in 1828, presenting himself as a man of the people, not the government.

In the 1836 election, the Democratic-Republicans' presidential candidate, Martin Van Buren, won both the popular vote and the electoral vote.

His main competition was the Whig Party. The Whigs hoped to expose the design of the Electoral College by running several different candidates in different areas, picking individuals with a great deal of regional appeal.

The Whigs hoped to win a party majority throughout the country with this method, which would then allow them to choose the individual they wished to become president.

They were unsuccessful and Van Buren won the election with nearly 60% of the electoral votes, though his popular vote total was just over 50%. His running mate, Richard M. Johnson, did not fare so well. Upon hearing the allegation that Johnson had children with an African American woman, the 23 Democratic-Republican electors of Virginia refused to give him their votes.

Without those 23 votes, Johnson did not receive a majority vote within the Electoral College. The decision was deferred to the Senate where Johnson was finally elected by a majority vote as the new vice president.

Horace Greeley established the Liberal Republicans (or Democrats) in protest of incumbent Ulysses S Grant. Greeley ran against Grant in the 1872 presidential election.

Though few took Greeley seriously at first, he gained support throughout the campaign and eventually gathered 40% of the popular vote, only 800,000 less than Grant.

Greeley received a total of 2.8 million votes and would have received 86 electoral votes had he not died on November 29, after the general election but before the Electoral College convened to cast their votes.

With no precedent to guide them, Greeley's electors split the 84 votes among four minor candidates. Grant had already won an absolute majority of the electoral votes so the result of the election was not affected. However, history was slightly skewed because Grant is credited with defeating Greeley, 286-0.

One of the most controversial presidential elections was between Samuel Tilden and Rutherford B. Hayes.

Tilden, a Democrat, won the popular vote by nearly 250,000 votes, over 3%. On the night of the election, both candidates, as well as most of the national media, assumed Tilden was the winner. However, some Republicans were not willing to give up so easily.

The candidate's electoral votes were close and the Republicans contested 20 of them, including 4 from Florida, 8 from Louisiana, 7 from South Carolina, and 1 from Oregon.

Out of these 20 electoral votes, Tilden only needed 1 to win the election. Hayes needed all 20.

Without any precedent for the many contested electoral votes, both parties agreed to set up a 15-person commission to study the contested votes and to impartially decide whom each vote should go to.

The commission was made up of five senators, five members of Congress, and five Supreme Court Justices. It was originally set up to include seven Democrats, seven Republicans, and one independent who was expected to be unbiased and nonpartisan.

The Democrats threatened to filibuster but eventually agreed to a resolution that Hayes would withdraw federal troops from the South, ending reconstruction and the enforcement of equal voting rights for blacks.

This election was clearly corrupted and has found a place in every debate over the Electoral College since.

For a more complete analysis and timeline of the 1876 election, see the special website designed by Harper's Weekly.

1888 was another election in which the winner of the popular vote did not become president.

Democratic incumbent Grover Cleveland had won the popular vote by a margin of 0.8% (90,596 out of 11,383,320 votes). Despite this slim popular victory, Republican Benjamin Harrison won the Electoral College majority (233 out of 401 votes).

Harrison won the Electoral College without the popular vote by winning slim majorities in his winning states and suffering considerable losses in his losing states. Six southern states favored Cleveland by more than 65%.

The reason for this split was the issue of tariffs. The South strongly favored lowering of the tariff. The Republicans approved of high tariffs and were unpopular in the South. Tariff reform gave Cleveland immense support in the southern states, but the South alone was not enough to win the election.

When elected in 1884, Cleveland was the first Democrat elected since before the Civil War. He came back to challenge and defeat Harrison in 1892. 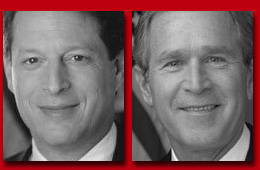 The 2000 Presidential Election was the most recent election where the popular vote winner was not elected. George W. Bush, son of former President George H.W. Bush, ran on the Republican ticket against Democratic candidate, and the sitting Vice President Al Gore.

The election was plagued with allegations of voter fraud and disenfranchisement. Rumors of illegal road blocks, unclear ballots, and uncounted votes, particularly in swing states like Missouri and Florida, were rampant.

Florida became the key state as the election drew to a close. Consisting of nearly 6 million voters, Florida was officially won by a margin of 537 votes, after a process of recounting the votes and a Supreme Court ruling.

Voters complained about confusing ballots and many Florida voters believed that they accidentally voted for Pat Buchanan, a conservative running on the Reform ticket, when they meant to vote for Al Gore.

Another significant candidate in the 2000 election was Green Party candidate Ralph Nader. Nader attracted just under 3% of voters with a progressive platform focused on social and environmental issues.

Democratic supporters targeted Nader as being a "spoiler" for Al Gore. Since Nader was left-of-center, Democrats argued that most of his voters would have otherwise supported Gore. In such a close election, many believe that Gore would have won if Nader had dropped out of the race.

The 2000 election resulted in numerous court battles over contested ballots and recounts. These lawsuits escalated to the U.S. Supreme Court where the final, 5-4 decision was made, ending the recounts and giving the state of Florida's electoral votes to George W. Bush.

In the end, Gore conceded the election publicly, though he did not hide his displeasure at the Supreme Court's ruling.