In contrast, ranked choice voting (RCV), sometimes called instant runoff voting, upholds the goals of majority rule and voter choice. RCV alleviates concerns about the dreaded “spoiler effect” and encourages winning candidates to reach out to more people. Unlike traditional runoff elections, it accomplishes these goals in a single election.

Ranked choice voting allows voters to rank candidates in order of preference (i.e. first, second, third, fourth and so on). Voters have the option to rank as many or as few candidates as they wish, but can vote without fear that ranking less favored candidates will harm the chances of their most preferred candidates. First choices are then tabulated. If more than two candidates receive votes, a series of runoffs are simulated, using voters' preferences as indicated on their ballot. 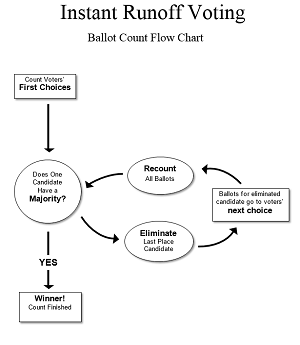 A visual guide to how RCV works. Download the flow chart.

Ranked choice voting voting allows for better voter choice and wider voter participation by accommodating multiple candidates in single seat races and alleviating the "spoiler effect," which can result in undemocratic outcomes. RCV allows all voters to vote for their favorite candidate, while avoiding the fear of helping elect their least favorite candidate. It ensures that winners enjoy majority support when matched against their top opponents.

Although used in most American elections, plurality voting does not meet these basic requirements for a fair election system. Compared to traditional runoff elections, RCV saves tax dollars, reduces money in politics and elects winners when turnout is highest.