From 1870 until 1980, Illinois elected its state house of representatives in three-winner districts, extending cumulative voting rights to its voters. With cumulative voting rights - a form of fair representation voting - the single biggest or strongest political group could not dominate elections. Instead, each three-winner district fairly reflected more of the diversity of its voters, with Republicans winning in Democratic strongholds and vice-versa.

In a series of interviews conducted in 1998, Illinois political leaders described the benefits of the system. For example, John Porter - Republican Illinois state representative from 1973 to 1979 and Member of Congress from 1980 to 2001 - said that "it led to a much more independent and cooperative body that was not divided along party lines," and recommended that it be used to elect the U.S. Congress. To hear Illinois lawmakers describe the system in their own words, watch this video:

Following the civil war, the Illinois state legislature was severely polarized between the Republican-controlled northern half of the state (including Chicago) and the Democrat-controlled south.

When the Illinois Constitutional Convention convened in 1870, Delegate Joseph Medill (also editor of the Chicago Tribune) made the case for extending cumulative voting rights in multi-winner districts to address polarization. The Convention supported Medill's proposal, and the voters approved it the same year.

The new system worked as intended. Most districts elected at least one member of each major political party, and the system fostered inter-party cooperation and bipartisan legislation. The system was presented to the voters again in 1970, and the voters again favored the continued use of cumulative voting, with 56 percent support.

In the 1970's, attorney Robert Bergstrom began a series of campaigns to shrink the state legislature and use exclusively single-winner districts. His petition drives failed in 1973-74 and again in 1978. However, following 1978, a controversy regarding legislative salaries led to a successful drive to reduce the size of the state house, and in 1980 the "Cutback Amendment" made it to the ballot. Only 44 percent of those casting a vote in 1980 voted on the Cutback Amendment, but it nonetheless passed, and since 1982, Illinois has elected its house of representatives only from single-winner districts.

Since its repeal, leaders from both major parties in Illinois have repeatedly called for the return of fair representation voting. In 2001, Democratic Rep. Feigenholtz and Republican Rep. Winkel co-sponsored a measure to again elect the house of representatives from three-winner districts while returning cumulative voting rights to the voters. In 2001, Barack Obama - then a junior state senator - co-sponsored a bill with Republican Tom Walsh to return Illinois to multi-winner districts and cumulative voting.

Voters still have cumulative voting rights for local elections in Peoria, Illinois. It was adopted there to resolve a lawsuit brought under the Voting Rights Act in 2001 and its success at representing not only Peoria's African American population but the full political diversity of Peoria led to the city choosing to retain the system in 2011.

The Illinois Assembly on Political Representation 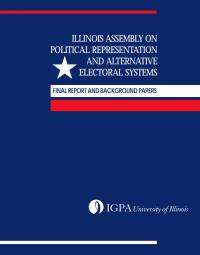 In 2001, a bipartisan task force led by former Republican governor Jim Edgar and former Democratic Congressman and White House Counsel Abner Mikva issued a report calling for the return of fair representation voting to Illinois. Read the full report by clicking on the image to the right.

The report noted several problems in Illinois since the repeal of fair voting. Among them, lack of choice and competition, low turnout, high campaign costs, limited representation of voters, and a lack of deliberation in the Illinois legislature. As that report noted, "Many factors contribute to this disturbing lack of competition, but none is more significant than the use of the winner-take-all system to elect Illinois state legislators."

After carefully evaluating election reform on a variety of metrics, the task force unequivocally proclaimed that the best option for remedying these issues would be the return to fair voting in multi-winner districts. Specifically, it stated that a return of cumulative voting rights would tend to: