Choice voting refers to the used of ranked choice voting in multi-seat elections. It is an American, candidate-based form of proportional representation that allows like-minded voters to elect candidates in proportion to their share of the vote.

To vote, voters simply rank candidates in order of preference, putting a "1" by their first choice, a "2" by their second choice and so on. Voters can rank as few or as many candidates as they wish, knowing that a lower choice will never count against the chances of a higher choice.

To win under choice voting, candidates need an exact number of votes called a "threshold". For example, in a ten-seat legislature, candidates need roughly 10% of votes to win, and the threshold would be approximately 10% of the total number of votes cast. After counting first choices, candidates with the winning threshold are elected. To maximize the number of voters who help elect someone, "surplus" ballots beyond the threshold are transferred to remaining candidates according to voters' next-choice preferences: in the most precise method, every ballot is transferred at an equally reduced value. After transferring surplus ballots until no remaining candidate has obtained the winning threshold, the candidate with the fewest votes is eliminated. All of his/her ballots are distributed among remaining candidates according to voters' next-choice preferences. This process continues until all seats are filled. Computer programs have been developed to conduct the count, although the ballot count often is done by hand.

For a visualization of the vote transfer process: [Choice Voting Flow Chart] 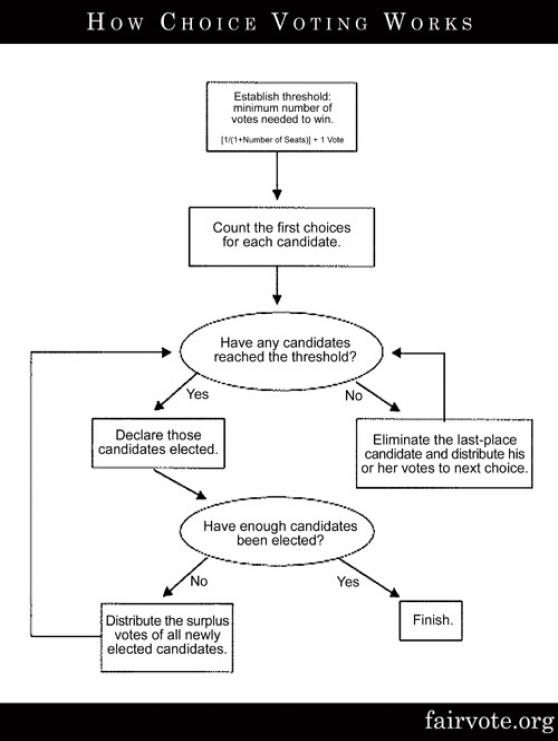