We'll be back next month with more detailed news from FairVote, but as summer comes to a close we wanted to share two

First, Katrina vanden Heuvel had a widely syndicated commentary published in the Washington Post, where she makes a powerful case for advancing our fair representation plan and builds upon her recent piece on the National Popular Vote plan. Vanden Heuvel extends the logic of her previous analysis to showcase how House elections can be reformed using multi-seat districts and a fair representation alternative, highlighting our interactive flash map (which shows such plans for every state in the country with more than one House district). Take a look -- and please sign this petition to ask your House Member to support a bill to make this change.

Second, Executive Director Rob Richie had a letter published in the New York Times, making the case for a right to vote in the Constitution. The letter dovetailed nicely with new advances for our Promote Our Vote resolutions and our new website, which highlights various efforts to secure a constitutional right to vote.

We've attached both pieces in full below. You also might enjoy Richie's Gainesville Sun commentary on how Florida could resolve its redistricting lawsuit with the 2014 elections, as well as John Burbank's piece on proportional representation, and Larry Bradley's commentary about Instant Runoff Voting. There are also several new pieces on FairVote's blog.

Trying to ensure the fundamental right to vote 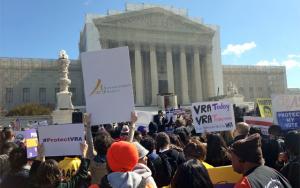 Your Aug. 12 editorial “Where Voting Is Now Easier,” about the divergent directions states are taking on the accessibility of voting, underscores an unsettling reality: Our 50 states and more than 10,000 local jurisdictions structure and administer elections that are all separate and unequal. Our nation is long overdue for an explicit right to vote in the Constitution.

In 1787, our founders were not ready to establish that right. Over time, the right to vote has advanced largely as a state right. Federal constitutional changes have expanded suffrage, but they have never established it as a fundamental right of American citizenship. Until we join most states and other nations in enshrining the right to vote in our Constitution, some states and localities will infringe on voting rights, whether by design or as a byproduct of running democracy on the cheap.

Congress is entertaining H.J. Res. 44 to put a right to vote in the Constitution, a measure backed by a growing number of local governments. Let’s end the voting wars and accept voting as the fundamental democratic right that it is.

We need a fairer system for choosing House members

In the original conception of our Constitution, the House of Representatives was to be the branch of government that best reflected the will of the people. House members cannot serve without being elected — vacancies are not filled by appointees — and they must face the voters every two years. Notably, the House holds pride of place as the first branch of government to be described in the Constitution. The framers move directly from “We the People” to the House, underlining the notion that, for our Constitution (and our government) to function, representatives must be accountable to the people.

Unfortunately, as we near the 2014 midterm elections, the reality of House races today clashes with that goal.

Let’s start with the connection between votes and seats. In 2012, we faced a major choice between the major parties and a mandate on President Obama’s first term. In the presidential race, Obama defeated Mitt Romney in the national popular vote by almost three percentage points, and Republicans suffered the worst performance in Senate elections by any major party in a half-century.

In House races, Democratic nominees overcame incumbent advantages for Republicans and won the national popular vote by more than 1.1 million votes. By those numbers, Americans painted the Capitol royal blue. Shockingly, though, Republicans won 54 percent of the House seats,establishing for themselves a 33-seat majority. And looking ahead, analysts estimate that Democrats may need as much as 55 percent of the popular vote in November to secure a majority.

Such a disconnect between voters and those who are installed as their congressional leaders goes far beyond any distortion we’ve seen in the Electoral College in presidential elections. It’s absolutely unacceptable in House elections, and it deserves far more debate than it has received.

The most-discussed culprit for the abysmal nature of House elections is gerrymandering. Every decade, states redraw congressional districts. Given the sophistication of today’s technology, the growing partisan divide among voters and the relatively low-profile nature of the process, those in charge of mapping have the means, motive and opportunity to use redistricting to help their friends and hurt their enemies. Republicans in states such as Florida, Michigan, North Carolina, Ohio, Pennsylvania and Virginia did just that. Barack Obama carried all those states in 2008, but today, Republicans hold a 68-31 edge in those states’ House seats.

But while gerrymandering matters, we must think more broadly. The core problem turns out to be districting, not redistricting. Congress’s 1967 law that mandates use of single-member districts for House elections has institutionalized the practice of shoehorning voters into boxes that restrict choices and distort representation. That is, districts are drawn in ways that lead to results predetermined by the powers that be. But today, there’s a growing call, from members of Congress including James Clyburn (D-S.C.) to institutions such as The Washington Post editorial board, to consider allowing voters to define their own representation in multi-seat district elections.

FairVote has created just such a fair-representation plan that Congress has full authority to establish. Every state would keep its same number of seats, but districts would be combined into larger districts drawn by independent commissions. Of critical importance: In each new “superdistrict,” like-minded voters could elect candidates of choice in proportion to their share of the vote. To illustrate: In this “open-ticket system,” a voter would cast a vote for one candidate. This vote counts for the candidate and, if that candidate is associated with a political party, also for that party. Seats are then allocated to parties in proportion to their share of the vote using a proportional-representation formula — like that used by Democrats to allocate convention delegates in their presidential primaries. Each party’s share of seats is filled by its candidates who won the most votes. An independent wins by exceeding the minimum share of votes necessary to win. (Watch FairVote’s excellent video for a primer on the system.)

In Massachusetts, for example, more than a third of the state’s voters consistently vote Republican, but the GOP has not won a House seat there in two decades. Yet by consolidating Massachusetts’s nine districts into three districts of three seats each, and by using a fair-representation system, that significant bloc of Republican votes would consistently win three — rather than zero — of Massachusetts’s nine seats, a direct translation of the voters’ will. Similarly, Democrats could end Republican monopolies and exaggerated majorities in states such as Kansas, Ohio, Oklahoma, Pennsylvania and Texas.

Although novel, fair representation has the potential to draw a strong coalition of support. Women, for example, are deeply underrepresented in House elections, with more than four in five seats still held by men, and women win about 10 percent more seats in multi-seat state-legislative and city-council elections than they do in congressional districts. Other supporters would be those in favor of 50-state parties, as we would engender two-party competition in every corner of the nation. Third parties would be able to field viable candidates, not mere spoilers, and our ideological polarization would be lessened with a new mix of representatives that better reflects the diversity of our thoughts and interests.

How we can move such a bold plan forward? To start, Democrats who are crafting a redistricting reform package should enable commissions to create such plans. State leaders should petition Congress for an exemption from the 1967 mandate. Maryland state Sen. Jamie Raskin (D) has proposed that two states that have done partisan gerrymanders — one for Democrats and one for Republicans — could even enter into an interstate compact in which they agree to utilize a fair-representation plan together.

We may have an opportunity this year. In July, Florida’s congressional gerrymander was tossed out by a state judge on the grounds that two districts did not comply with the state’s Fair District constitutional amendments, which had been approved by voters in 2010. A FairVote proposal has shown how, in a fair-representation system, the five Florida districts affected by the ruling could be combined into a single district, its representatives chosen by the open-ticket rule. It would make every voter count, provide fairer partisan representation and uphold the Voting Rights Act.

People are thinking creatively about how to re-energize American democracy. It is not acceptable to sit on our hands as we watch the value of a vote get more and more skewed. It’s time to launch a drive for a fair-representation system for Congress so that the House of “We the People” can finally live up to its name.