FairVote Reformer: Winner-Take-All Electoral System is a Loser for Democracy 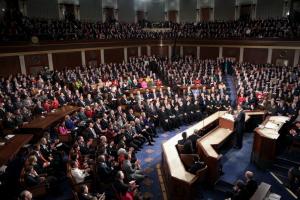 In his State of the Union speech on Tuesday, President Barack Obama put particular stress on the theme that launched him into national prominence in 2004 at the Democratic Party convention, declaring “that we are still more than a collection of red states and blue states; that we are the United States of America.” Later in the week, he visited two strongly Republican states, Idaho and Kansas, to explain his policy proposals.

The fact that it was the president’s first visit to Idaho of his presidency tells us how his vision of a “united states” clashes with the unforgiving logic of winner-take-all elections. The three, remaining unvisited states -- South Carolina, South Dakota, and Utah, -- are also firmly “red,” underscoring how the White House political team has prioritized swing states in his first team. In 2008, for example, Obama won 49.7% of the vote in North Carolina and 44.7% in South Carolina. That may look a small difference, but he visited North Carolina 18 times in his first term and held the 2012 Democratic convention there; yet he hasn’t been back to South Carolina since his key primary win there in January 2008.

Why? There simply is no way his campaign could turn 44.7% into a win in 2012. Today, nearly all competition between the major parties only takes place within the 47% to 53% spectrum of partisanship. Outside that narrow range, you’re almost certainly wasting money, whether running for president with winner-take-all rules for allocating electors or running for U.S. Congress.

In presidential elections, winner-take-all voting means that the White House is effectively elected by the small - and ever shrinking - number of swing states, rather than by the voters in all 50 states. Citing FairVote’s research, The Los Angeles Times’ George Skelton in a new column favoring the National Popular Vote plan for president writes that: “Under a winner-take-all system, the vast majority of states are shunted to the sidelines, forced to watch from afar as the candidates fight it out in a few battleground states.” The Washington Post last week used FairVote data to show visually how partisan lines are dividing America.

Fortunately, there is an alternative to winner-take-all. The National Popular Vote plan for president would make every vote in every state in every election count equally, creating new incentives for equitable campaigning. With fair representation voting for Congress, the left, right and center of every region of the country while ensuring that every voter can take part in a meaningfully contested election. This is something President Obama has a record of supporting: as a state senator, he introduced a billto bring fair representation voting to Illinois and another bill to establish ranked choice voting (“instant runoff”) for primaries.

That reform history is consistent with his call during the State of the Union speech to uphold voting rights, when he stated “surely we can agree that the right to vote is sacred." Such statements are an encouraging sign that the president will once again address fair representation and voting rights, issues that he was generally a champion for during his early days as a politician in Illinois. Reaching across the aisle for support to change winner-take-all elections is the best say to end the political dead zones in red and blue states, which leave voters helpless and resulting in less fair representation. (See our summary of 2016 dead zones that underscores how much of the country is stuck in a false “red” or “blue” reality based on winner-take-all voting.)

•           Attend our Conference! FairVote is co-sponsoring the ninth annual Voting and Elections Summit, Feb. 5-6 at George Washington University. The first day will include a keynote address done by Congressman Keith Ellison and a FairVote plenary with a great lineup of 20-minute dialogues. The second day will include FairVote-run workshops on getting involved in our Promote our Vote project and our full reform agenda.

•           Ranked choice voting advocacy and news: Ranked choice voting (RCV, or “instant runoff”)- made headlines this month, with a new editorial endorsement from the Washington Post, in support of new RCV legislation in Washington, D.C and with ”don’t miss” comments from Minneapolis Mayor Betsy Hodges in a prominent event in DC (see Hodges talk about RCV at the 29 minute mark). In Maine, the Committee for Ranked Choice Voting has collected more than 60,000 signatures to put RCV on the November 2106 ballot and won support from Maine’s largest newspaper. The system will also be used to determine the winner for Best Picture category at the Oscars. Take the poll here to show us how you would rank the contenders.

•           FairVote analyses garners attention: FairVote’s work has been getting attention recently, with a piece from Aaron Blake in the Washington Post on the decline of swing states, a prominent citation from Dylan Matthews at Vox that stirred vigorous debate (to which our Nathan Nicholson responded in posts here and here.), and the George Skelton Los Angeles Times column on the National Popular Vote plan.

•           Thank you! Our thanks to all of our supporters and donors for their generous year end support. We surpassed our end-of-year goals, but it’s not too late to help make a difference in 2015 with a new donation!

Highlights from the FairVote Blog